Hello, people. A new BOTW has finally dawned on us, and it happens to be the 10th! Bit of a milestone, but long may it review brickfilms.
This week, I was using a lot of the amazing site bricksinmotion.com to find out films. I strongly recommend you to find films that way too. Right, on to the judging!
3.TED-E - ZachMG. This film is great. It's realistic, has great sound effects and music, and the animation of the robot is fantastic. It's a very creative idea, but I find the ending sad (spoilers!), but I like the fact the plot line is a mix of realistic, emotional and humorous. ZachMG is an animator that isn't just well-known for his humour, but mainly his animation quality (not to say that his humour isn't hilarious anyway!)
2.Timelapse Test - obscec. This is a quick film, but it's amazing. The set design is fantastic, but the lighting is the thing that I was most impressed by. Take it from me, he controlled and animated the light. Not only is that a very unique technique, but it's very, very hard to master, and that is what obscec (well known brickfilmer CrazyEd's second channel) has done. The only problem is that it doesn't feature any sound whatsoever, I thought he could put some calm, chiming music in the background (Come on, it would work!)
1.Harry Potter Meets A Rancor - brickshowtv/BrotherhoodWorkshop. This is a great idea. It's clever, unique, and has a great use of special effects. I think that this is a really cool animation, and is another funny idea from BrotherhoodWorkshop's creative mind. Also, if you watched the Behind The Scenes Video, you'll notice that a lot of work was put into this film. Masking, greenscreening, VFX, graphic design, voice acting, natural set design, animating on clay, is there anything Kevin Ulrich can't do?
Thanks for  reading this blog post. If you want to see more, click HERE! 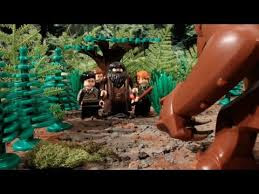