The Most Powerful Wizard In The World - BOTW #8

I've been oddly excited about writing this blog post. I think it's because we've had a great week of brickfilms and I've been wondering about what I'll choose. There's one thing I'm really disappointed I left out, but well, that's life, isn't it?

3.The Sad Truth (Rerun) - thefourmonkeys. These guys released this new film on their new channel, and it is one of their most popular videos with over eleven thousand views. They re-released it on their old channel, which it quite a bit more popular, with around 22,000 subscribers. I think all their fans were glad to see the film again, and the fans still subscribed to the classic channel would think it was a good film. I especially like the joke at the end. These guys really know how to make me (and others) laugh!
2.LEGO Marvel Super Heroes-Spider-Man - -Paganomation. This is a very clever animation. I really like the time taken into this film, as rope pieces are not easily manoeuvred around while animating. Paganomation have had a breakthrough of animation lately, and not all of it has been for the Lego group. I'm really looking forward to the 'Little Guys...In Space!' project. This is a very good animation, and is also very funny.
1.LEGO Voldemort Goes Wand Shopping - BrotherhoodWorkshop. This is one of the funniest things I've ever seen. This was a great film, and a surprising break from LOTR (well...kind of). It had great use of the set Diagon Alley, and I'm also a really big fan of the graphic design, VFX, masking and voice acting. Also, it was sponsored by artifexcreation, which is a first. I've never seen a brickfilmer sponsor another brickfilmer, so I find this video a start in many ways. Also, I like it.
Thanks for reading this blog post. If you want to see more, click HERE! 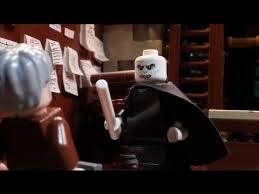