Guys, I'm really sorry that I kept you waiting last week. There weren't enough films last week, nor this one either, SO I DECIDED TO COMBINE THEM! Wow. Aren't I such a blimming genius. Let's get on to the voting.
3.End Bob - TheFuntasticFilms. This was a video to make a point about the fact that the stupid character in many films is called Bob. It's not a bad film. It's very short, but I like the voice acting and the joke. One problem: this was released on the 1st of May, but the Funtastic crew promised to upload THREE videos last month, and only uploaded two. So I expect a film to come out later in the month!
2.PIRATE FISH (ReBrick Film Competition) - Kooberz. This one was definitely one of the grandest sculptures made for the ReBrick film competition. Kooberz is a professional animator, so he has A LOT of Lego - as we see in The Lego Wii U, so I wasn't surprised when he produced this grand sculpture. Also, Kooberz has 20,000 patient subscribers who wait for his new, high quality animation to come out. The only trouble I have with this video is that the Pirate Fish emerges from the ship, they aren't really made from the same parts, which they should be according to ReBrick rules.  But that is just me being picky (again).
1.The Dino-Bus - a ReBrick LEGO Movie contest entry from MonsieurCaron - MonsieurCaron. M. Caron has produced yet another high quality animation. The thing with this ReBrick entry is that I love both the first bus and the Dino one (but isn't it a giraffe?) I also like the background design and the fact the bus driver goes dizzy when it's taken apart. This is the only entry I've seen which has an intro, middle and outro, and because of this more structured storyline, this has won BOTW #6.
Thanks for reading this blog post. If you want to see more, click HERE! 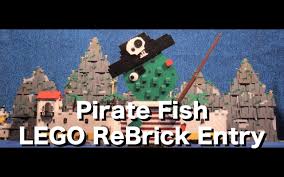