This week is BOTW #13. I was hoping to myself all week that it wouldn't be unlucky, and it actually wasn't. I got some good animations, and I would like to share them with you.
3.Boo-BricksinMotion Animation Challenge - MegaGill74. This video is cool. The music and lighting really help the creepy atmosphere, and it achieves the scary mood. It was a bit random at the end, but aren't all animation challenge entries? Anyway, the humour did help the video not be (another) lego parody of Slender, so I appreciate the randomness. Also, congratulations to MegaGill for his first film to be featured in BOTW! I've ben subscribed for a while, ever since a repelling spider featured him in his blog. He produces high quality animations regularly, and he's really good.
2.LEGO Marvel Super Heroes - Iron Man - Paganomation. This video is the second in a series of Lego Marvel videos. I really like them, and Paganomation are really good, professional animators. The set design is really cool, and they use a whole load of techniques that are difficult (such as VFX techniques, masking, set design, great uses of lighting) and I have a great deal of respect for them. The only trouble is, as animators for the Lego group (awesome) they make videos which are usually directed at younger audiences, which can make the outcome slightly cheesy, but they are really enjoyable for all audiences.
1.Animation Reel - CrazyEdChannel. This is a great reel. Every single animation in the reel is smooth, well lit , uses great animation techniques - I'm starting to think that CrazyEd may be one of the best animators out there. The time he puts into his work is phenomenal, and I really want to congratulate him on making such amazing animations, and thank him for entertaining us in his usual manic way. He is, truly, as great an entertainer as he is an animator. 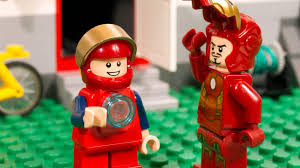