Yes, it's time for another post. Only 5 films this week, but that's making my life easier. On to the judging.
3.Lego ReBrick Contest Entry - ZachFBStudios. This was an amazing entry to the ReBrick Lego Movie Competition. I really liked the music, the animation, the craft they built, this would be a perfect entry to the ReBrick competition. Watch out for it in the Warner Bros. movie next February!
2.Build-A-Base - a repelling spider. This was the ReBrick entry that I thought had the most time put into it. Repelling spider also went for the garbage truck, like ZachFB and BrotherhoodWorkshop, but this was a very unique creation. Personally, I am excited because now I have loads of things I could turn my garbage truck into! Only one entry has been put through so far (that I know of), bionicle28's, but I also feel that this has the potential to get included.
1.The LEGO Movie ReBrick Competition Entry - thefourmonkeys4. Woah. This is a really good entry. Personally, I found this had amazing animation quality, the best out of this week's videos, and also they transformed a normal red car into a fully posable bionicle creature. I find it slightly unclear about why the man was angry, though, but a lot of these entries didn't fully follow the fact that they had to do that because there was an object blocking them or something like that. Well. Yeah. Another week gone, and more brickfilms. Sigh, it's been a good week.
If you want to see all my contenders, click HERE!
Thanks for reading this blog post, Bye! 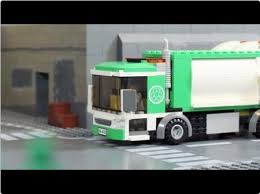